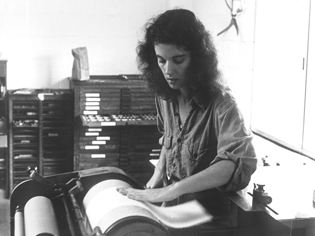 Meadow Press was established In Iowa City, Iowa in 1974. At that time, Leigh McLellan was a student at the University of Iowa working toward an MFA in poetry in the Writers Workshop. In autumn of 1974, I took Introduction to Typography from Kay Amert and printed my first book, Stepping Out, which sold out in one week in February 1975. In the spring I took an apprenticeship class from Kim Merker at the Windhover Press and continued there through the fall. Four more books were printed at Kay's Typography Laboratory during the years 1975-1977, as well as many posters for the university.

I was also employed by Constance Sayre of the Black Oak Bindery, and by Norman Sage at the University of Iowa Press as a book designer, until my move to San Francisco in June 1977, taking A Garland of Iowa Songs with me to bind after arriving. The advice and instruction from these teachers formed the basis for my knowledge of fine printing and gave me a solid foundation in book design and structure. In the library, I discovered the work of Claire Van Vliet, who became a major inspiration and influence.

On my arrival in San Francisco, I was employed by Andrew Hoyem where I mastered lock-up for the platen press. After seven months, I left to resume my career as a free-lance book designer and fine printer. The years of 1978-1979 were spent searching out design work with the major trade and text book publishers in the area. I have spent about half my time making a living in book design and production and the other half as Meadow Press.

I bought my first press in July 1979, a Vandercook Universal I, and moved it into the back of Linnea Gentry's Amaranth Press where I remained until September 1980. The year of free rent and association with Linnea was a benefit that I cannot appreciate enough. When Linnea moved to Santa Fe, the press was stored at a friend's garage.

I began entering book shows in 1979 across the country and in Europe. Meadow Press books were continually exhibited until 1989, winning awards in the Bookbuilders West Book Show and the Rounce & Coffin Western Books Exhibition. Major shows have been: Grolier Club, Printers' Choice, 1979; New York Public Library, Seventy from the Seventies, 1980; Klingspor Museum, American Press Work, 1982; University of Wisconsin, Breaking the Bindings, 1983; and the Center for the Book Arts Tenth Anniversary Show, 1984.

January 1981: I found a small, but sunny studio on Sheridan Alley, moved in the press and types, and celebrated with a gala opening. During the year, I became contributing editor to Fine Print magazine. 1982 brought election to the Pacific Center for the Book Arts board of directors and participation as designer and producer of The Ampersand newsletter.

In spring, I received the invaluable aid of Tracy Davis from the Mills College internship program. In the fall of 1983, I was asked by Kathy Walkup to teach one semester of Printing, Design, and Typography at Mills College while she made an addition to her family. This was an enormously rewarding experience, the glow of which is still felt. Also, Meadow Press received an NEA small press assistance grant to print a book of nonfiction by Maxine Hong Kingston. 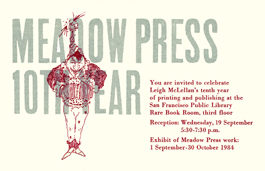 The tenth anniversary of the press was celebrated in 1984 with a retrospective exhibit at the San Francisco Public Library. I continued teaching with a course on Adhesive Book Structures and decorated papers at the California College of Arts and Crafts. In 1985, I began earnest work on my last three books, Blank Country, A Sky Empty of Orion, and Hawai'i One Summer, and hung a one-press show of my work at the Mendocino Art Center. Meadow Press was featured in an article in Fine Print on women printers by Kathy Walkup.

1986 through 1989: Meadow Press books were included in exhibits in Vancouver; Oxford, England; Los Angeles AIGA; the Bancroft Library in Berkeley; the Victoria & Albert Museum in London; the National Museum of Women in the Arts in Washington D.C.; and the Arvada Center in Colorado; culminating with another retrospective at the University of San Francisco's Rare Book Room in 1988. I also continued to teach workshops in bookbinding and woodcut techniques at Mills College.

I consider Hawai'i One Summer to be the most ambitious of my works, combining the brilliant talents of author Maxine Hong Kingston, woodcut artist Deng Ming-Dao, binding designer Betty Lou Chaika, calligrapher John Prestianni, printing assistant Tracy Davis, and bookbinder Klaus-Ullrich Roetzscher. Melding the creativity of these artists into one unified work has been one of the most rewarding experiences of my printing career. The publication of the book was celebrated with a reception at Mills College and featured in the April/May 1988 issue of American Craft magazine.

2002 to the present, I teach letterpress printing on the Vandercook proof press, book design, and paste papers at the San Francisco Center for the Book, http://www.sfcb.org, as well as book making with children and paste paper workshops at local branch libraries. As Leigh McLellan Design, I have designed text and trade books commercially for many publishers and individuals in the San Francisco Bay Area and beyond since 1977. My commercial book design work may be viewed at http://www.leighmcdesign.com. 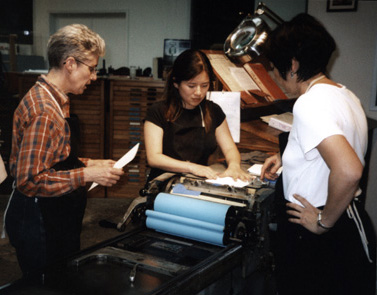 Back to the top • Home